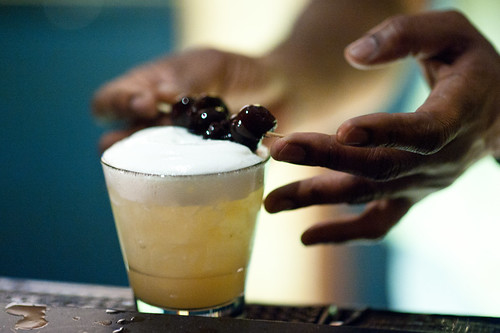 There’s nothing better than a delicious accident.  I made camomile bourbon a while back, and, for some reason, decided to use it in a Camomile Manhattan.  Look, I was young, experimenting, and a little obsessed with Manhattans, I didn’t really know what I was doing.

Anyway, some months later, having run out of regular bourbon (shock-horror indeed). I tried the camomile-infused version in a Whiskey Sour.  What a revelation.  The lemon and the camomile sat so well together I now almost despair a little that I didn’t think of this in the first place.

So, making up for lost time, I heartily commend to you the Camomile Whiskey Sour:

Simple syrup (sugar and water) is a key component of a whole host of cocktails, and is, as the name suggests, so simple that you may as well make it at home rather than splash out on the pre-made stuff.

As I mainly drink whiskey based drinks, I don’t have a problem with using any left over sugar I have lying around.  If you’re looking to make syrup for use in clear drinks (such as a Mojito), you might want to stick to white cane sugar to avoid getting a yellowish hue!

To make the syrup:

A dash or two of vodka will help the mixture to keep longer if you’re not a prolific drinker as it will prevent the the growth of bacteria or mould.  As a result, the mix should keep for an indefinite period (especially if refrigerated).

If you’re looking to experiment, consider adding vanilla, lavender, cinnamon or some loose leaf tea to the mix and create a new flavour profile for your syrup.

Sour mix is a key ingredient for a world of sour drinks (think Margarita, Whiskey Sour and Cosmopolitan).  It is almost as easy to make as simple syrup, as all it requires is the addition of lemon juice:

Use the sour mix in place of the sugar and lemon/lime juice where required.

The Whiskey Sour is another venerable whiskey based drink with a disputed past and a wealth of variations.  Whilst its sharp initial strike of lemon juice can be off-putting to some, it really comes in to its own as an after dinner drink on your summer holidays, and with a slight leniency that reads lemon juice as water, it still fits with our four key ingredient principle.

The sours are a whole family of early cocktails that predate their oft-confused but by no mean close relations the Sourz.  Sours are categorised, perhaps unsurprisingly by their use of a sour juice (lemon or lime) instead of the water of our traditional Bittered Slings, and other famous sours include the Margarita (tequila, triple sec and lime), Sidecar (brandy, triple sec and lemon) and Daiquiri (rum, sugar and lime).

The legend of the Whiskey Sour takes us back to the then Peruvian, now Chilean port town of Iquique in 1872 where Elliot Stubb an English sailor decided to jump ship and open a bar.  Stubb experimented with a range of local ingredients and settled on a most agreeable range of aperitifs based around the limon di Pica which he added to any liquor he had to hand.  After adding a liberal splash of whiskey and a strong dose of sugar to his limon one day, Stubb hit upon a delicious sweet and tart concoction which he dubbed the Whiskey Sour.

As is usual among drinks of a late Victorian vintage, the official recipe (should such a thing exist) is subject to intense debate.  In the absence of Elliot Stubb’s limon di Pica though, the classic method is as follows:

One of the key variants of this recipe is to omit the egg white, which is only recommended if you find yourself in a Whiskey Sour emergency (who hasn’t?), or if you’re like me and can’t be expected to separate an egg white at a crowded cocktail party, or don’t expect to need a whole bottle of egg white in your fridge.  Ultimately however, the drink is much the poorer for the absence of egg white, so this is strictly to be approved for emergency use only.

A far better variant can be obtained by using camomile infused bourbon for a Camomile Sour.