The final Advent Sunday cocktail is a sazerac with a twist – the dried fruit flavour of our Mince Pie Cognac and sweet sherry: 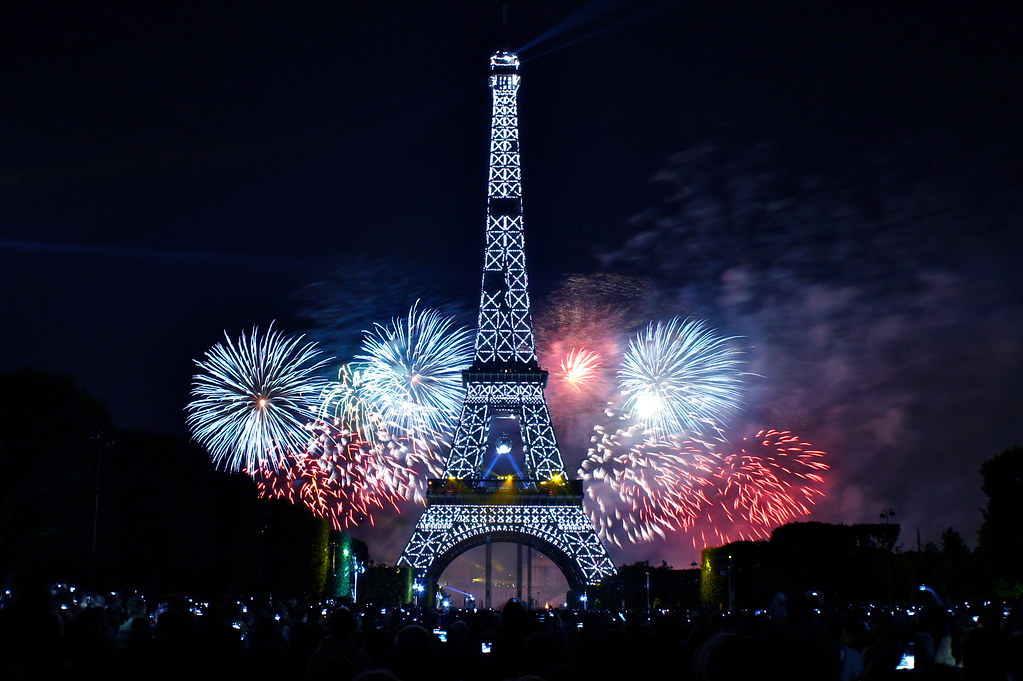 Today is Bastille Day, the annual French commemoration of the day that the gleeful decapitations of the upper classes began in 1789. As a result it may seem a little disingenuous to celebrate this uprising with a somewhat bourgeoise cocktail of brandy and absinthe, and of course the tower itself wasn’t created until some hundred years after the revolution, but it’s a great recipe with a French name, so bear with me.

1. Rinse a chilled champagne flute with absinthe and tilt until the inside is coated. Add a few ice cubes and set aside.
2. Add two and a half measures of XO cognac, half a measure of Cointreau and half a measure of Suze to a mixing glass.
3. Fill the mixing glass with ice and stir well.
4. Discard the ice and excess absinthe and strain the drink into flute. Garnish with a twist of lemon.

This post originally appeared as part of Social and Cocktail’s ‘My Favourite Cocktail’ series.

It may seem strange, coming from a Scotch whisky enthusiast who writes under the name of House of Bourbon, that my favourite cocktail is commonly made with rye whiskey, and before that even used grain-less cognac as a base. But we dipsologists can be a contrary bunch, and as it is best to approach tipular fixing with an open-mind, I feel no compunction in announcing that my favourite cocktail is the Sazerac.

Now the Sazerac isn’t the sort of brightly coloured drink you see fooling around with sparklers and fancy fruit embellishments. In fact, in its purest form it should be served without any garnish at all. And that is the first limb of its charm. Before serving your Sazerac straight up in an unmarked glass the bartender will pause to sell you the dummy of a twist of lemon peel. After expressing the oil he will whisk it away, with suitable distain, and allow the rich flavour of the rye whiskey, Peychaud’s bitters and absinthe to have untrammelled control of your senses.

The second charm of the Sazerac is the ritual by which it is prepared. You cannot simply toss everything into a shaker, rattle to a count of thirty and strain. A Sazerac is built from the bottom up and then inverted into a pre-chilled, pre-rinsed glass (or in my preference, goblet).

Thirdly, the Sazerac has appeal because it is a survivor. It has faced some tough times in the 150 years or so of its life. First came the phylloxera epidemic that devastated northern Europe’s wine crops in the 1870s (so cognac became rye). Then, in 1912, came the US ban on absinthe (so absinthe became Herbsaint). Then came Prohibition (and the drink withered, or at least all the ingredients apart from the sugar cube and the lemon peel were likely made in an old bathtub). Finally, after the blessed relief of the 21st Amendment, Sazerac aficionados noticed with despair that most of the USA’s rye distilleries had not survived the great drought and so the rye became bourbon.

After a history as complicated as this, it is no small miracle that the complex Sazerac, now back to its purest 1850 recipe has survived, nay flourished, and that can be put down to the fourth inherent and most profound joy of the drink: the combination of the butch, spiced notes of rye tempered with the sweet, cinnamon of the absinthe and bitters. A bracing, complex marriage enhanced by the markedly apparent suggestion of fresh lemon, all contained in the mysteriously rich red-brown tipular.

Fix the House of Bourbon Sazerac as follows:

And so to foam.  Having come all this way (48 posts and counting) without touching on the trend for ‘molecular mixology’ seems remiss, so let’s correct that right now.

Having been warned off the use of dry ice after recent horror stories in the UK, and not having any scientific background or interest in what is really just a gimmick, cocktail foam is about the only element of molecular mixology that can be easily and relatively safely approached by the amateur.  While the use of a rotovap or calcium bath does appeal (the former more than the latter), the costs are somewhat prohibitive at this stage, and so we stick to foam.

There are a number of ways to create cocktail foam, and recipes differ on whether you should use egg white and elbow grease (or Aerolatte), or gelatine and N2O or a combination of the lot.

Your choice will most likely be influenced by the resources and ingredients you have to hand, but my preference is for a hybrid recipe:

To dispense the foam, shake the siphon until no movement can be felt inside and slowly layer the foam on top.  Keep the siphon in the fridge when you’re not using it.

The absinthe rinse is a useful bar technique, and a key step in the creation of a good Sazerac, Vieux Carré or Absinthe Martini.  Of course the rinse technique isn’t restricted to absinthe and can be used with scotch whisky to create an Islay Martini or a peat-infused Manhattan.

The rinse exists to provide a subtle hint of a usually strong-flavoured ingredient, and can be an alternative to the floated dash, where a teaspoon is layered on top of the finished drink, or a spritz from an atomiser.  As a result, a rinse provides a great opportunity for experimentation with unusual or complementary flavours.

To rinse a glass:

The Vieux Carré, literally “old square”, is named after the French district of New Orleans where it was invented, by barman Walter Bergeron, in 1938.  Bergeron was working at the Hotel Monteleone, a spectacular Beaux-Arts style hotel, now famous for its rotating Carousel Bar.  Although the Vieux Carré pre-dates the revolving bar, something about its name or story always puts me in mind of the fun fair.

A close cousin of both the Sazerac and the Manhattan, the Vieux Carré is naturally one of my favourites and one of the few times you will see me reaching for a bottle of brandy.  The cocktail uses Benedictine as a sweet base, then combines rye whiskey and cognac, and can be served with an absinthe rinse to create a Louisiane.

To make your Vieux Carré:

Variations include the use of dry vermouth instead of sweet, the aforementioned absinthe rinse, and alterations to the balance of rye, cognac and vermouth.

Today is National Absinthe Day (in the US at least), and what better way to celebrate than with a quick post about one of literature’s great cocktails.  Ian Fleming may have given us the Vesper, but Ernest Hemingway went a few steps further down the road to decadence when he created Death in the Afternoon.

The cocktail, named after Hemingway’s book about the history and practice of bull-fighting, was created in 1935 for So Red the Nose, Or Breath in the Afternoon, a collection of new cocktail recipes proposed by famous authors of the time.  Hemingway’s instructions were as follows:

“Pour one jigger absinthe into a Champagne glass. Add iced Champagne until it attains the proper opalescent milkiness. Drink three to five of these slowly.”

The great author was credited with the creation of a number of other cocktails, but it was Death in the Afternoon which was said to be his favourite after he developed a taste for the bohemian concoction whilst living in Paris.

Variants of the recipe also include the addition of sugar and bitters (we can’t stray too far from our original bittered sling after all, and what better decadent replacement for water than champagne?), lemon juice, or a garnishing rose petal.

House of Bourbon
Create a free website or blog at WordPress.com.