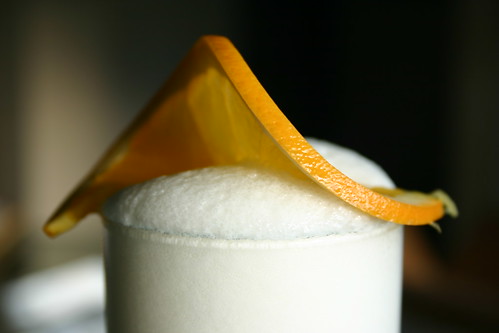 The Fizz Family is an extension of another famous cocktail family; the Sours.  For every Sour there is a Fizz, and for every Fizz there is a Sour, it’s just that for some spirits one is usually more successful than the other.  That is why we find the Gin Fizz and not the Gin Sour, and the Whiskey Sour but not the Whiskey Fizz on the list of all time classic mixed drinks.

A Fizz, in its simplest form, is just a Sour with the lengthening addition of soda water.  A creation of the late nineteenth century, when mixed drinks began to emerge from the bittered sling category and include some of the first variants that allowed them to be considered, long, cooling, refreshing drinks.

The Gin Fizz opens itself up to a number of variations, but we start with the basic:

The Ramos Gin Fizz, however, is anything but basic, and also requires you to have some time on your hands.  For a start it includes a number of controversial ingredients (orange flower water?  Heavy cream?) and then it comes with the firm instruction to shake for no less than twelve minutes.  It is not a drink to make if you are concerned about dying of thirst.

Invented in New Orleans in 1888 by barman Henry Ramos it is a silky smooth concoction which, if made to the exact recipe is a perfectly balanced masterpiece finished in ostentatious and labour-intensive style:

Or, if you want a halfway house and don’t have twelve minutes of shaking to wait, try the Elder-Gin Fizz, a British summer time classic:

Rugby and drinking go hand in hand, and you need look no further than The Famous Grouse’s long association with the Scottish national team to know that whisky and rugby are a natural combination.

My early rugby watching was done in sunny south London rather than the frozen north, so rugby for me was always associated with beer.  Normally the warm flat stuff that men with beards drink – remember the Tetley’s Bitter Cup and Greene King as ‘official beer’ of the England rugby team?   Even when I moved north, much of my rugby watching was accompanied by a plastic pint cup of lager for the Heineken Cup and occasionally Magners for the Celtic League, at least in part for its prominance on the shirts of Edinburgh and London Wasps in the mid-2000s.

Since then however, I have wrapped up warm for enough afternoons and evenings at Murrayfield and one particularly chilly November day on the Aberdeenshire coast where even the players came out to warm up in tin foil coats under sleeping bags.  As a result I have developed an appreciative understanding of the use of the hip flask and the variety of concoctions it can contain.

The obvious choice for the hip flask is straight whisky, but with tastes differing so much from person to person as you pass it down a row of seats, it’s far safer to mellow the whisky with the addition of a drop of Drambuie, the ‘satisfying’ blend of malt whisky, honey, herbs and spices that was supposedly gifted to the Clan MacKinnon by Bonnie Prince Charlie after a hard day at Culloden in 1746.

The original version of the Nail actually dates from the golden sands of Hawaii in the 1940s and not the West Stand at Murrayfield on St Patrick’s Day 1990.  Much like the Dry Martini, purists can argue for days about the ratio of whisky to Drambuie, but 3:1 is just about standard for your hip flask.  It can also be served up, or over crushed ice as follows:

The Royal Nail is a luxurious alternative to the Rusty Nail, described by its creator, Simon Difford, as ‘two British Royals bittered by a yank’.  It forgoes the Drambuie, uses Peychaud’s bitters for its mellowing, blending effect and was a staple of my hip flask during this summer’s wedding season.  The Royal Nail can also be found ‘straight up’, but is more commonly served over ice:

The Galvanised Nail uses Drambuie, apple, lemon and elderflower to smooth the edges of the Scotch.  Another Simon Difford creation, dating from 2003, it is usually served up:

The Cajun Nail is a mix between the Sazerac and the Rusty Nail, which uses whiskey instead of whisky, ramps up the Drambuie content and gives us another chance to practice our Absinthe Rinse.  The Cajun Nail is best served over ice: