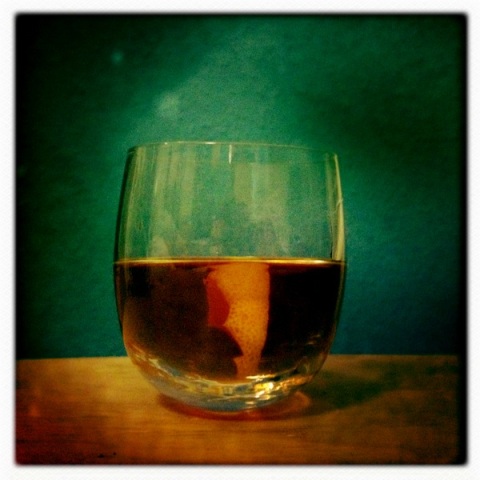 The Sazerac was the original New Orleans variation of the bittered sling.  Down in the Deep South, just whiskey, bitters, sugar and water was not enough; the drinks required the added frisson of a touch of la fée verte.  Born in the Sazerac Coffee House, New Orleans some time in 1850, the Sazerac was named for the imported Sazerac-de-Forge et Fils cognac which was originally its main ingredient.  Some time between 1875 and 1879 while the great French vineyards were being decimated by cheeky wee aphids, causing production of cognac to fall by two-thirds, the cognac was replaced (out of necessity) with whiskey.  The fine clientele of the Sazerac Coffee House never looked back.

The essence of the Sazerac depends on the inclusion of Peychaud’s bitters, and some records would have you believe that Mr Antoine Amadie Peychaud created the Sazerac to show off his family’s old aromatic bitters.  Legend has it that Mr Peychaud used to serve his Sazeracs in a large egg cup.  We prefer ours in a chilled metal goblet (or a rocks glass will do):

Of course if you want to add a touch of flair to your Sazerac making sessions, follow the two-glass method:

Good luck managing step five without pouring most of the drink over the nearest flat surface – it takes a little practice!